I am no longer posting to this blog. You can still access all my old posts via the archive list to the right. To read more of my writing, literary as well as athletic, please visit my website.
Posted by Chris Cameron at 3:28 PM No comments:

“There’s something lost, but something’s gained…”

It is impossible to live without failing at something, unless you live so cautiously that you might as well not have lived at all – in which case you fail by default.

One of the things I both loved and feared about live performing was the possibility of surprise; it was a presence among us onstage, like an extra cast member. No matter how prepared I was (and sometimes I wasn’t all that prepared), there was always an element of chance – a musical blip, a wardrobe malfunction, a technical glitch. Or something wonderful that electrified the performance.

The same was true in athletic events. At the start of a long race there is no way I could predict what would happen over the next fourteen or more hours. And I’ve had a lot happen to me: a broken spoke in the pouring rain with 120 kilometres still to ride at Lake Placid; two flat tires followed by a water shortage at the aid stations on a very hot day in Penticton, leading to nauseating dehydration during the marathon. In both those cases I went on to finish the race. Then there was a flareup of Morton’s neuroma out of the blue at 65k of the Comrades Marathon and extreme vertigo coming out of the swim at Ironman Mont Tremblant. I dropped out of those races.

Standing at the starting line is like standing in the wings of the theatre; everything behind me disappears and all possibilities are before me. And both these are akin to starting out to write something new: I am certain not to end up where I was headed without course changes along the way. The published version of my memoir was like the mythical Ship of Theseus, containing almost none of the parts it had started out with.

Interestingly, in my day-to-day life I am not much of a risk-taker or improviser. I tend to get riled if plans are upset; I like routine a lot of the time. To step outside familiar parameters is to open the gate to improvisation, failure, loss.

But three things in my life that came to me by surprise – singing, endurance athletics, and writing – invited me outside those parameters, where I have been given a chance to push myself to places I would never have dreamed of going: Carnegie Hall; a dusty road in South Africa, a mountain path in Iceland, a sunblasted highway in California; the pages of my published book.

If pressed for an analysis, I would say that I do these things to surprise myself.

When I started singing at age 16 and running at 33, I remember being elated to discover that there were things I had never done before that I could get better at. Each year I planned to do something more than I had the previous year. Sometimes I failed in spectacular fashion, but often I succeeded.

Now, 33 years further on, I wonder if this is still true. I ran my first 50k two years ago at age 65 and improved my time the following year. Can I run farther this year than I did last year? How many more can I do? Or has the ship sailed? Is the challenge between now and age 99 simply not to lose what I have?

The answer is … it doesn’t matter. These days I find I am losing the need to create long-term goals to carry me forward. Once, goalsetting was therapy for my tired mind as well as a generator of useful milestones. Nowadays I focus more on simply seeing what happens. I enter maybe one or two trail races a year, and these are low-key events where people run as much for the joy of being out in the forest as to set a personal best or to clock more mileage into their running logs.

It no longer matters to me if I go farther than I did yesterday. There is no endgame, there are only the steps I take along the way.

Because I run to see what is possible; because I sang for the physical pleasure of guiding music through my body; because I write to enjoy the process of shaping words into communication; and because I am willing to accept whatever challenges these pursuits throw at me along with what they offer, I believe I’ve maximized my involvement in all of them.

By easing up on future goalsetting, I gain today. My reward for enjoying the moment is ... the moment – nothing more or less.

Pioneering astrophysicist Cecilia Payne-Gaposchkin’s wrote two lines in her autobiography that speak clearly to me:

I was not consciously aiming at the point I finally reached. I simply went on plodding, rewarded by the beauty of the scenery, toward an unexpected goal. 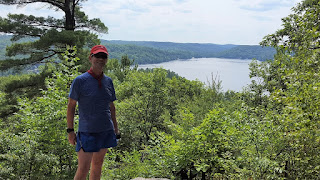 For what I have chosen to assume is the final third of my life, I plan to keep my eyes open for those new and unexpected goals, and to enjoy the scenery.

This is my last Lyricycle post. I’ve run out of things to say here.
I’m not sure what I had planned for this blog when I began writing it in 2008; I only know that I enjoyed writing it. The people who visited unexpectedly touched me more than I can say: a writing colleague; a fellow cyclist from the Race Across the West; friends I met in a sandstorm in Death Valley; a volunteer from a trail race in Ontario.

My writing will have another home before too long, and I'll post a link here. 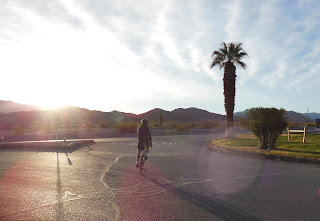 Posted by Chris Cameron at 5:06 PM No comments:

"I couldn't see anybody, and I knew what the loneliness of the long-distance runner running across country felt like, realising that as far as I was concerned this feeling was the only honesty and realness there was in the world … no matter what anybody else tried to tell me."
― Alan Sillitoe, The Loneliness of the Long Distance Runner

As the day warms, I am lacing up my shoes for a two-hour run.

In an alternate universe, a parallel me is starting to write a novel that has a theme of belonging. In both realities, I am aware that I am the only resident.

A writer is often an outlier, socially speaking; an observer and documenter rather than a participant. Even authors who excel at the social aspect of their job (and there is one) will admit that when they are sitting in front of a half-finished subplot wondering how they are ever going to get untangled from it, there isn’t much advantage to being a pleasant dinner companion or a social media maven.

I am a long distance runner who has never experienced loneliness. Last summer when I was slogging up a mountain in Iceland, up to my shins in slush with sleet whipping into my face, I didn’t look around for someone to share the experience with. It was mine – for better or worse – and I wanted it all to myself.

My memoir, Dr. Bartolo’s Umbrella, was aimed at a particular target audience and within the parameters I had set for myself it was more successful than I had ever dreamed it would be. These were the parameters: I wanted whoever read it to enjoy it. Word got back to me that many did.

But that is not why I wrote it. I wrote it because I loved the simple individuality of the process.

To me, the purest joy and greatest challenge was the writing itself: to write clearly but lyrically; to find new ways of saying things that have been said a million million times; to put thoughts in order logically but fantastically; to communicate symbolically and be believed viscerally.

To do this, I had to choose critically which advice I would accept from teachers, editors, and peers, because every word in my book is in held in place by my imagination and craft, not theirs. My Acknowledgements section is as a full and as heartfelt as any author’s, but ultimately I was the one who sat alone at my keyboard for years, conceiving, writing, revising. I do not write by committee.

(I have yet to experience the traditional author’s nightmare of having absolutely no one show up to one of my readings. This must be the literary manifestation of loneliness.)

Nor do I run as part of a team. Unless I decide to join the local Wednesday Afternoon Walking and Conversation Group – which I am not currently contemplating – a major characteristic of running for me is that it is a solitary, non-social activity.

So, if I cherish my solitude so much, why go into an organized running event at all? That’s a question I’ve asked myself increasingly in past years. For one thing, I like the challenge of an unfamiliar course planned and laid out by someone else; these always seem to be a bit less forgiving than the paths I choose for myself. But lately I’ve left behind races like Ironman and big-city marathons in favour of low-profile trail races – same great distances and support with much less noise.

For me, a running event is still an individual process that takes place in the company of several hundred others who are also locked in private negotiation with their own limitations and dreams. I am in company, but every step I take is mine alone.

I have always found purity – a “realness” as Sillitoe writes – in the fulfillment of a personal goal: in working to prepare for it; in stretching to achieve it; in doing what I told myself I was going to do. Pushing myself to go farther today than I did yesterday reminds me of the struggle to align words and thoughts. When I edit my writing I want the revision to be an improvement on what was on the page before; occasionally it is. Crossing a finish line is akin to the feeling of polishing a sentence that finally says exactly what you want it to – the certitude that there is no more work to be done. 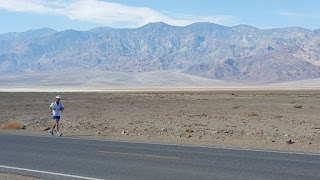 Running and writing: two things that bring me joy.
Two things I do alone.

PS: This will be my penultimate post in Lyricycle. After ten years, I find that my focus and direction have moved beyond the scope of this blog. After all, there are only so many ways I can describe moving myself across the planet under my own power (a phrase I imagine I’ve used about a dozen times in the last decade). I am developing a new website, and I’ll leave a link to it on this page when it is operational.

Posted by Chris Cameron at 11:20 AM No comments: